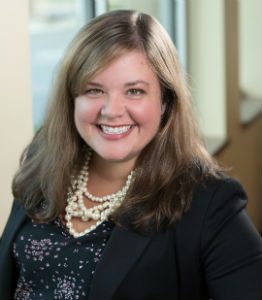 FUQUAY-VARINA, North Carolina (April 22, 2019) – Fidelity Bank is pleased to announce Erica Pittman has joined its team in Wake Forest as Vice President and Senior Business Development Officer. In her new position, Mrs. Pittman is responsible for developing and managing business banking relationships within the community, as well as, contributing to the sales efforts of the Fidelity Bank Wake Forest branch located at 231 South White Street.

Erica has 15 years of banking experience in the local market. Prior to joining Fidelity Bank, she worked as Vice President and Small Business Specialist at BB&T.

Erica attended the University of North Carolina at Chapel Hill where she earned a Bachelor of Arts Degree in Journalism and Mass Communication. She currently resides in Raleigh with her husband, Kevin, and their son, Smith.