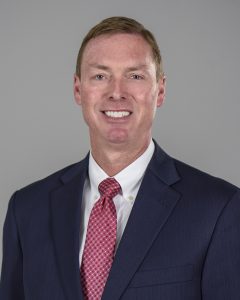 FUQUAY-VARINA, North Carolina (November 8, 2018) – Fidelity Bank is pleased to announce John Anthony has joined its team in Wake Forest, as Senior Vice President and Market Executive. In his new position, Mr. Anthony will be responsible for developing and managing commercial banking relationships in Wake Forest, as well as overseeing the sales efforts of the two Wake Forest branches. His office will be located at the Fidelity Bank branch located at 231 South White Street.

John has 29 years of banking experience in the Wake County market. Prior to joining Fidelity Bank, he worked for First Tennessee Bank as the Retail Banking Executive for the Mid-Atlantic Region. He was also a founding executive and Chief Administrative Officer for TrustAtlantic Bank in Raleigh. John is very active in the community. He currently serves as the immediate past board chair for the United Way of NC and is a past Chair for the United Way of the Greater Triangle.  He also serves on the boards of Anna’s Angels Foundation and North Ridge Country Club.  John has won numerous awards for his community involvement including Business Leader Magazine’s Mover & Shaker award, Wake County Public School Systems Silver Award, and WNCN television’s Top Ten Community Commitment award.

John received a Bachelor of Science degree in Industrial Technology from the East Carolina University. He is also a graduate of the Bank Administration Institute’s Graduate School of Retail Banking in Madison, Wisconsin.  John enjoys tennis and golf and currently resides in Raleigh with his wife, Camino, and has two children, Marisa and Sofia.

Fidelity Bank is a full-service financial institution with assets of approximately $1.9 billion headquartered in Fuquay-Varina, North Carolina.  The Bank owns and operates 59 branches throughout North Carolina and Virginia; and was awarded a 5-star (superior) rating by BauerFinancial.  For more information, please visit www.fidelitybanknc.com.