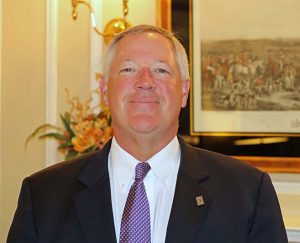 FUQUAY-VARINA, North Carolina (March 16, 2017) – Fidelity Bank is pleased to announce Ed Jordan has joined its team as Group Vice President and Regional Executive. In his new position, Mr. Jordan will be responsible for developing and managing business banking relationships; as well as leading the Greensboro, Lexington, Stokesdale, Stoneville, and Thomasville branches in sales and market expansion. His office will be located at the Fidelity Bank branch located at 2501 Battleground Avenue in Greensboro.

Jordan is a Lexington native and has over 35 years of financial experience in the local market. Prior to joining Fidelity Bank, he worked for The Bank of Ozarks as a Market President. He also held management positions for the Bank of the Carolinas and Wachovia Bank. In addition to his financial background, Jordan is active in the community. He is a board member of the Davidson County Economic Commission and Davidson Progress. He has also served on the Lexington Memorial Hospital Board of Directors, Grace Episcopal Church Vestry, and was Chairman for the Davidson County United Way.

Jordan received a Bachelor of Science degree in Business Administration from Washington & Lee University. He currently resides in Lexington with his wife, Carol, and has two children, Sam and Charlie.

Fidelity Bank is a full-service financial institution with assets of approximately $1.8 billion headquartered in Fuquay-Varina, North Carolina. The Bank owns and operates 59 branches throughout North Carolina and Virginia; and was awarded a 5-star (superior) rating by BauerFinancial.