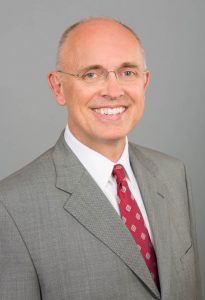 FUQUAY-VARINA, North Carolina (January 2nd, 2018) – Fidelity Bank is pleased to announce Tom Cox has joined its team in Holly Springs, as Vice President and Branch Manager. In his new position, Mr. Cox will be responsible for business development and providing outstanding customer service to bank customers of the Fidelity Bank branch located at 7000 GB Alford Highway.

Tom has over thirty years of financial experience in the Wake County market. Prior to joining Fidelity Bank, he worked for First National Bank as a Branch Manager and Small Business Banker. He has also held management and business banking positions at Yadkin Bank, PNC, RBC, Wachovia, First Union, and Raleigh Federal Savings Banking. In addition to his financial background, Cox is active in the community; he has been involved with the Holly Springs Chamber of Commerce as a Chamber Ambassador since 2015.

Tom received a Bachelor of Science degree with a concentration in Political Science from James Madison University. He currently resides in Cary with his wife, Renee, and has two children and one grandson.